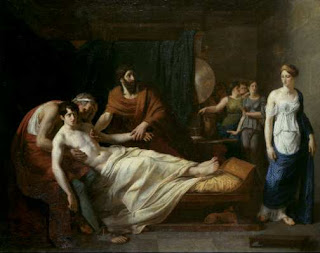 Many times the question comes up at one or another of the online groups I participate in, regarding whether, as you become enlightened, or as you awaken from the dream, your body should automatically heal from any existing illness, or physical malfunction. There are differing points of view in the course community on this topic.

You might be surprised to find out that it is perfectly possible that what we call an enlightened or awake person can indeed get sick... or die, more specifically their body. In fact, some parts of the course would seem to indicate that at truly advanced stages of awakening, the body cannot sustain that kind of light for very long:


"Sometimes a teacher of God may have a brief experience of direct union with God. 2 In this world, it is almost impossible that this endure. ... 8 If God were reached directly in sustained awareness, the body would not be long maintained. 9 Those who have laid the body down merely to extend their helpfulness to those remaining behind are few indeed. 10 And they need helpers who are still in bondage and still asleep, so that by their awakening can God's Voice be heard." (M-26.3)

It is kind of difficult to define enlightenment from an ACIM perspective, ACIM offers us a process that we go through, in order to awaken, a path. It is the path of forgiveness. Forgiveness is a process; you forgive many things, for a long, long time, until you eventually have forgiven everything totally (See Stages of Development of Trust, M-4.I.A.3). However, in the final stage, you can still be in the world and let your body serve a purpose; it could have been sick, or deformed, or malfunctioning before you became enlightened, or you can choose to let it be sick as a way to lay it down, when the time is right, or you can let it be sick for a while and then heal, and use this as a teaching device to help others learn that you don't have to surrender your peace to illness, or the demands of a body, even death. Jesus did just that when He allowed His body to be crucified and killed, then chose to use it again and appeared alive to several people that knew He was good and dead; many Hindu teachers who have reached that state have died of cancer and other illnesses as well. Byron Katie, for example, had a degenerating eye condition and a miraculous experimental new surgery restored her sight.

Everything in the world is a symbol and it can stand for life or death, healing or sickness. You can choose healing then let the treatment chosen be the symbol of your acceptance of this healing and allow the doctors to do their 'magic' and it works, or it doesn't, but because you so choose, you are awake, you are perfectly aware and in control of this body, so just like illness doesn't happen to you, wellness doesn't just happen to you either, you make it happen, you run the universe, "all power and glory is given onto You Son of God."

Who knows! The bum on the street with the walking limp may be an enlightened one, there to teach you about kindness with the homeless. There once was a street person that sat on a park bench for two years... his name is Eckhart Tolle.

The cover is not an indicator of the contents of any book, neither is sickness an indicator of enlightenment or lack thereof. The secret is in whether it is a conscious (mindful) state or a
'victim' (mindless) state that is being experienced. Basically the question is this: Has sickness befallen him/her, or is he/she using sickness with purpose, basically not letting it disturb the Holy Grace that now surrounds every moment.

You will know by the grace, the peace that surrounds them even in their dying moments, or for as long as the body endures after the moment of enlightenment. The body could have been in bad shape beforehand, the teacher may choose to let it be, to run its course. Why waste time and effort healing a non-existent body that you know is not you? At this stage, the body has ceased to be important; it has ceased to be me or to matter. But as long as it can be of use to bless those who still sleep, and help join with them, then let it be...there is no telling how a master may choose to lay the body down; it does not have to be pretty, just like Jesus' walk to Calvary wasn't pretty at all…something really bad happened to Jesus on the way home, or appeared to happen, that is.

The course teaches that the forgiving mind cannot suffer, and that the Son of God is invulnerable. But it also teaches that the body is a projected image and it is a neutral thing. It is the mind that decides the state of the body at any given moment. It does not say anywhere in the course that the forgiving body will not suffer; the body, being a neutral no-thing, cannot forgive; only the mind can forgive, and only the mind can experience suffering or peace. So the experience of suffering is in the mind and not the body.

So, let's suppose that Byron Katie is enlightened and had an illness, or that Jesus was crucified, but did they suffer? Healing of the course is not about healing or resurrection of the body that is the whole point. Healing, as taught by this course, is of the mind of the Son of God, not the body his sick mind projected.

A sick body, a healthy body; they are both projections. Confusing your identity with a sick or a healthy body is the real sickness that needs healing. Once you heal from the misperception that you are a body, it ceases to matter what the body's condition is.

Quite the opposite, because there is enlightenment, there is no attachment to the body and there is no suffering (in the mind) so the body will be put to its best use, and it will be treated with kindness
and care as any good teaching-learning device, which is how its purpose is described in the course.

Any teaching regarding ACIM's healing as being of the body is not teaching ACIM but something else.

Why would an awakened mind be bothered (suffer) by the state of something it has experientially realized as non-existent? Why would you say that the body must be good, and pretty or the picture of
health in order to prove awakening? It is a no-thing, so its state matters not to the awakened mind.

From this perspective then, Byron Katie may have gotten sick and well again. Krishnamurti may have died of cancer and Helen Schucman as well. Jesus' body may have been broken and beaten and this body may have died from the abuse it was subjected to in a world that moves by certain laws.

But did and do they suffer? That is the question. The healing of the body is being used by ACIM cult leaders to subjugate and manipulate people as we speak. In ACIM Jesus says: "Yet would I offer you my body, you whom I love, knowing its littleness?" (T-19.IV.A.17). Hence, why would He offer you healing of your body knowing its unimportance?

The goal of The Course (and of Byron Katie's The Work) is the end of suffering, by questioning our untruth, unreal thinking. It is possible to go to Calvary or to a hospital, or to stand in front of thousands of people the day before you die of cancer sharing profound truths (J Krishnamurti) laughing, smiling and blessing everyone.

The Mind that God created Perfect cannot suffer. God did not create the body... God knows not of any-body, pun intended. God knows only GodSelf, and there is no place where the Father ends and the Son begins.

* NOTE: This article first appeared in the March 2008 issue of the Australian publication Adyar eNews - March 2008
Posted by Lucia at 8:55 PM 6 comments: Links to this post

Quote Of The Month

“Now you must learn that only infinite patience produces immediate effects. This is the way in which time is exchanged for eternity. Infinite patience calls upon infinite love, and by producing results now it renders time unnecessary." " (ACIM, T-5.VI.12. )

About A Course In Miracles